Editor’s Note
Hello to all, new and old, and welcome back to my little corner of the Internet! I’d tell you what to expect this edition but I’m sure you know by now. So with that, awaaaayyyy we go!
-@dog_lover11

Aldburg | In Progress
Project Leader: @Tobberz
Aldburg has slowed down a little, so there is a little less progress than usual. There is still a lot of jobs left to do, so help out where you can to complete this project!
- Editor, @dog_lover11

Bree | In Progress
Co-Leader: @LimeeFox Co-Leader: @dog_lover11
Massive progress - the surrounding landscape has been shaped out and now we’ve passed on to the texturing stage. Afterwards, we’ll be adding vegetation and other details. Many new houses have been laid out and many new roads and paths have been built. The hedge around the city is also being planned out. A couple of interiors have been completed.
- Project Leader, @LimeeFox

Our most recent build-off has been judged and finalised. Congratulations to @MarcelAlKenany and Tibborius for scoring a joint first place score of 18/20. To read the full results, click here.

The staff team also held another staff meeting recently, and the summary will be ready in the next couple of weeks.

Technical Corner
Our systems administrator @StealWonders has added 1.17 support to the server, so you can now join with a 1.17 client. However, as the server is still 1.16 based, you won’t be able to utilise any of the new blocks or features.

Promotions/Changes
LoveArrow has been given the rank of Trial after a successful application.

This week we have two featured creations, as per the two winners of our recent build-off. The two winners both created wonderful interpretations of the Rammas Echor, pictured below. 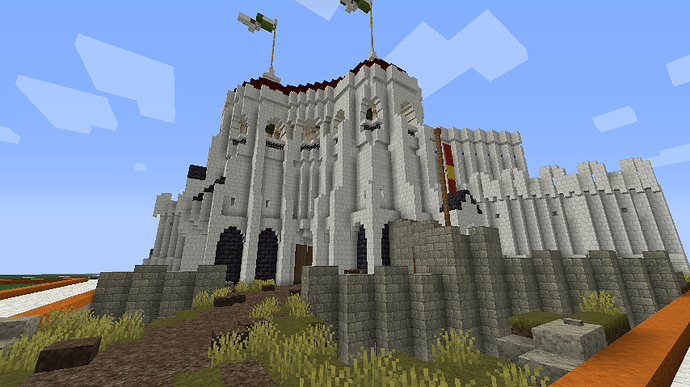 You know what they say, another day another dollar. Except, the day is actually two weeks and the dollar is actually another newsletter. That is this edition’s little word of wisdom complete, and with that I bid you goodbye o/

Sticking with a theme of superlatives, who or what was the largest creature to ever be seen in Middle Earth?


Answer to the previous quiz:

It is believed that the oldest (known) creature in Middle Earth is Tom Bombadil.

Great newsletter. Largest creature? Well that’s difficult, mostly because Tolkien’s descriptions in the Silmarillion are purposefully vague and inspired by the ambiguity of ancient myth. It does seem that when going by literal descriptions that Ancalagon the Black is wider than the peaks of the Thangarodrim are apart, in other words his wingspan potentially numbering in the kilometers. And of course, Ancalagon prominently existed in Beleriand during the first age, but I have little doubt that the War of Wrath took his flight above Middle Earth at some points. However, I do not fall into the camp of people believing that Ancalagon is ten kilometers from head to tail or whatever, even quite simply because he would not fit through the gates of Angband. When looking at dragons, I would say that Glaurung was almost certainly the largest, being the first and unlimited by flight. However, there is no hint that Glaurung ever crossed into Middle Earth, so that disqualifies him. Although Beleriand kinda counts as part of Middle Earth when looking at it as simply the place between Valinor and the Walls of the Sun, so really that gets even more convoluted.
But, potentially, there are even bigger creatures than the dragons? Ungoliant, in her swollen state, would possibly have towered over mountains; to the point that even the 3-50 meter tall Morgoth grew afraid. But then, maybe there are creatures in Middle Earth large beyond comprehension, seen but once. What fits this description? The nameless things.
" Far, far below the deepest delving of the Dwarves, the world is gnawed by nameless things. Even Sauron knows them not. They are older than he. Now I have walked there, but I will bring no report to darken the light of day, " said Gandalf. (Actually, off note, perhaps these are the oldest things in ‘Middle Earth’ as of the fourth age?) These could be gargantuan. They are vast gaping mouths crushing tonnes of primordial rock into nothingness, slowly thinning the crust of Arda. Perhaps they could be as long as the Ered Luin from end to end, their mouths larger than the greatest constructions ever made. If these are to be my candidates, then they should also fit the final criteria; have they been seen? Yes, actually, probably. When Gandalf ventured into the deeps fighting the Balrog, he glimpsed them in his wizard’s light. They are uncertain, shadowy forms hovering at the very edge of Tolkien’s mythology, but if I were to hedge my bets, it would be on these nameless things.

my dear master rivet-carnac, you are forgetting one key element in this equation.

Bombur is not a creature. He’s a god damn machine.