4324×1275
Editor’s Note
Well well well, look who it is. Me, actually. The last time I did one of these was way back for Newsletter #27, in April 2020. We’re coming up on two years of Newsletters now, which is a mighty achievement. It reminds me of truly how much we’ve advanced over the past two years, and while it may be entertaining to look back on our work from the past with mirth, we must all remember that without those stepping stones, we would not be here today. Without the learning curve of building projects, our current projects would not be so awesome. In some ways, every project is a happy little mistake.

With that, let’s have a look at recent progress. 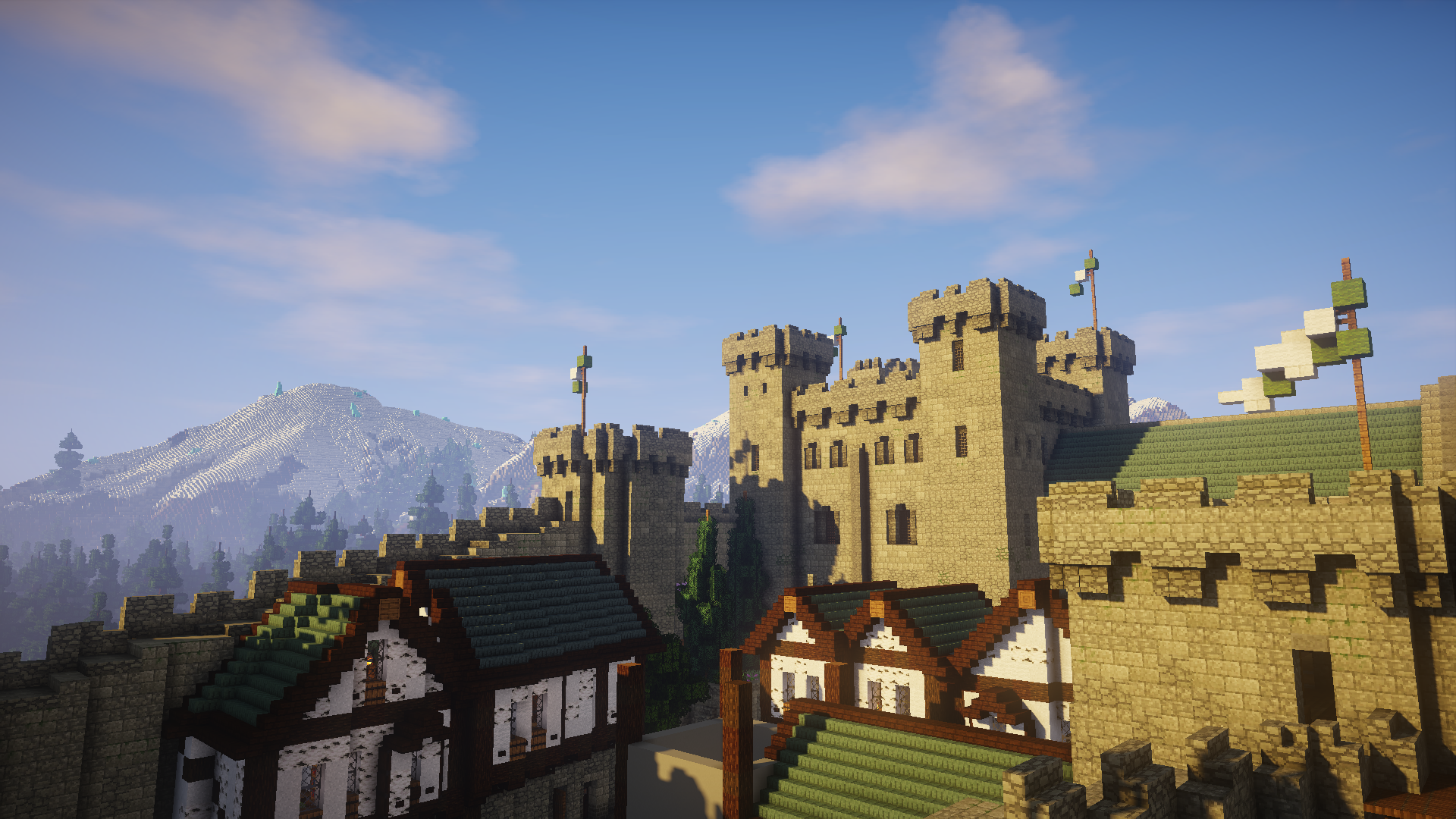 1920×1080
Aldburg | In Progress
Leader: @Tobberz
"Over the past few days Aldburg has slowed down a little, but this is entirely excusable as the team have put in an awful lot of effort into the project over the past month or so. We have planned out a fortified farm by the name of Eoham just outside the walls, which is waiting to be built all in one go so we can make a cute cinematic with ReplayMod.

"We’ve also been working a lot on the main hill area, over the river from the motte. Two ruined towers have been built here, along with a mining area and various other buildings. A Manor house & estate is also under construction here by @the_pharaohs_cat.

“Finally, work has begun on a logging cabin up in the forested foothills, and @Savitar has worked to expand the forest south to add to the Atmosphere of Aldburg. For now there are about 20 jobs to do, so I’ll personally hold off on adding any more until those are done.” 2400×1284
Bree | In Progress
Co-Leader:@LimeeFox Co-Leader:@dog_lover11
“Bree has had a huge amount of progress in the past two weeks. Whilst not a huge amount of planning has been done, we have chosen a hobbit hole design, and built several houses during a spontaneous team building session. Most notably, however, the Prancing Pony complex has been built in it’s entirety, and the main section of the inn’s interior structure completed. We hope to open the project to the builders very soon.” 2400×1284
Grimslade | In Progress
Leader:@LimeeFox
“We added burial mounds east of the town and enhanced the terrain. There are a few little terrain bugs left to be fixed, but the works on the cinematic are about to begin in the coming weeks. Our producer said that he’s busy next week or two, so the camera crew will have to wait a bit.”

1882×233
Resource Packs
In the past two weeks Tobberz and I have worked to fix any errors in the naming of the packs and create a more consistent repertoire of textures across the packs. As such each pack has had a v0.7 release this week, change-logs for which can be found here:

Download from here: https://www.epicquestz.com/resource-pack/ The Gondor Pack was split off from Legacy Pack 3.1 in 2020.

Download from here: https://www.epicquestz.com/resource-pack/ The Eriador Pack was split off from Rohan Pack 0.2 in 2020.

Download from here: https://www.epicquestz.com/resource-pack/ The Rohan Pack was split off from Legacy Pack 3.1 in 2020.

1882×233
Other Developments
We’ve had two meetings recently. The first was an Artist meeting (the first of them), in which I hear the Artists were very enthusiastic and helpful in offering ideas for the future of EpicQuestz and the community. A week later, we had a staff meeting wherein we went over some of these ideas, as well as discussion as to how to increase the server’s reach. Links to the summaries are here:


We have also, of course, been maintaining our plugins etc. Expect some changes and updates regarding social media in the coming weeks!

1882×233
Featured Creation
This week our featured creation is from our Artist @raarmaarwaar, specifically his White Downs plot. He’s also released this plot for download on Planet Minecraft, which you can view here: The White Downs Minecraft Map I can’t remember what to put here. So uh, semper excelsius, populus EpicQuestus!

Answer to the previous quiz:
@Enoshade has a vast paragraph to explain all:
Morgoth promised Húrin that he and his kin would be brought into 'darkness and despair', that 'evil shall arise' anywhere they go, and that "They shall die without hope, cursing both life and death." Whilst it is debatable whether Morgoth actually put a passive curse on them or if he actively caused many of the misfortunes that plagued Húrin's family, the chapters of the Silmarillion about Húrin's children are some of the most tragic and devastating ones to come about. Even as Húrin is released from his prison, after being forced to see all of the carnage brought about by his children, he is a broken man and brings only sorrow to those around him.

There are no mistakes, only happy accidents.

A very pleasant read, Mr. Berz.
I have absolutely no idea so I’m going to guess they have fancy shmancy names like Eregion or something.

Over the past few days Aldburg has slowed down a little

Good! Perfect, in fact. Rohan Terrain will have some time to catch up at its phenomenal speed similar to that of a steamroller.