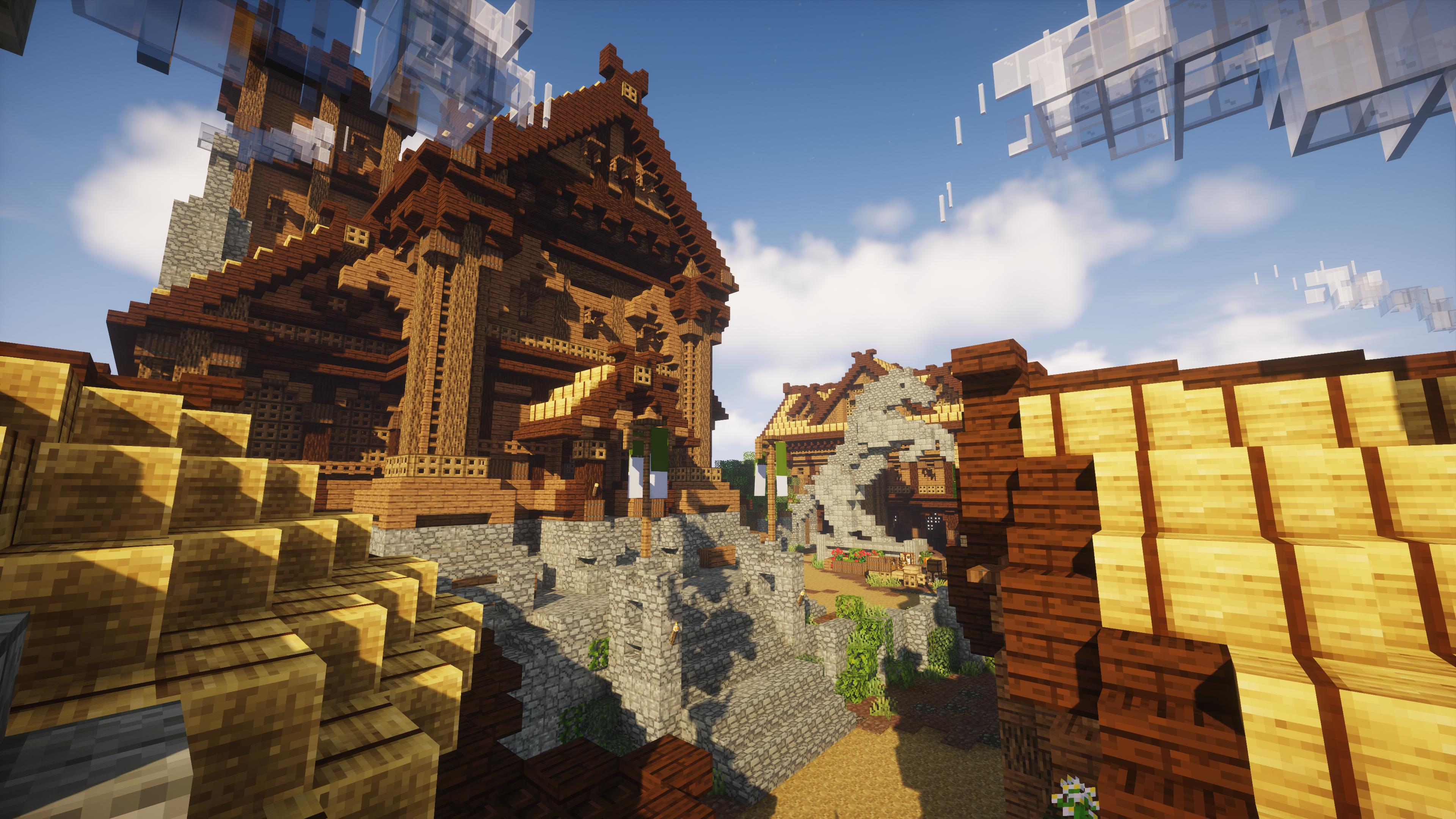 3840×2160
Editor’s Note
A very excited hello there, everyone! It is me, again, LimeeFox! I have to say that I really missed writing these letters, but the hosting is still shared among various members of EpicQuestz, so perhaps you won’t see me writing this again in the near future. But this isn’t the news you want to hear, you want to hear about our projects and behind the scenes development, so here you go!
- Editor, @LimeeFox 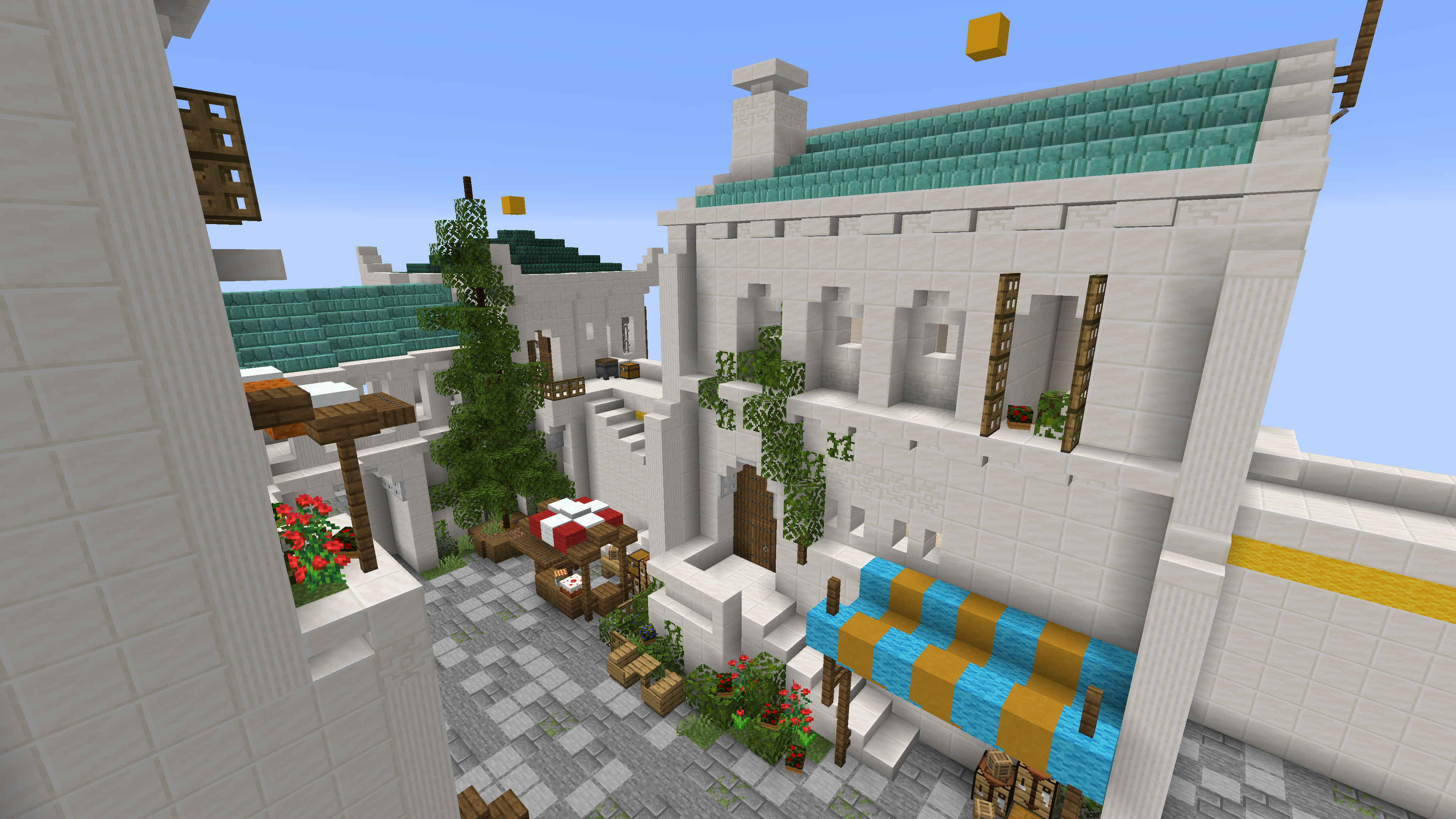 3840×2160
Minas Tirith | Paused
[Designer: @the_pharaohs_cat]
“There hasn’t been any progress for the past couple of weeks, but perhaps next fortnight we’ll show some progress! We will see.”
- Editor, @LimeeFox 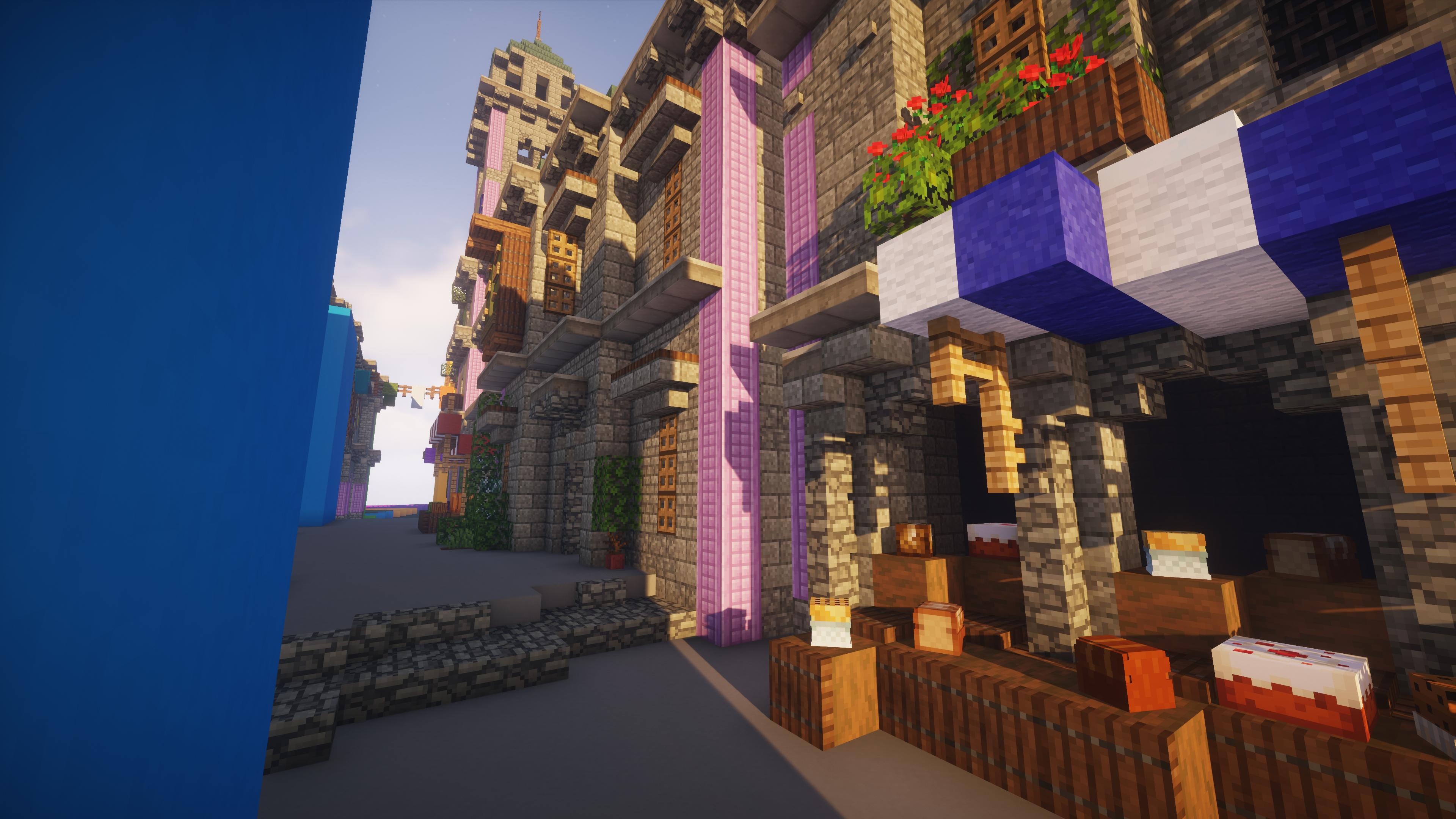 3840×2160
Osgiliath | In Progress
[Designer: @the_pharaohs_cat ]
“I have designed part of an example street for Osgiliath. We are also currently writing a guide on how to make Osgiliath houses, but this may take some time. Otherwise not much has happened.”
- Designer, @the_pharaohs_cat 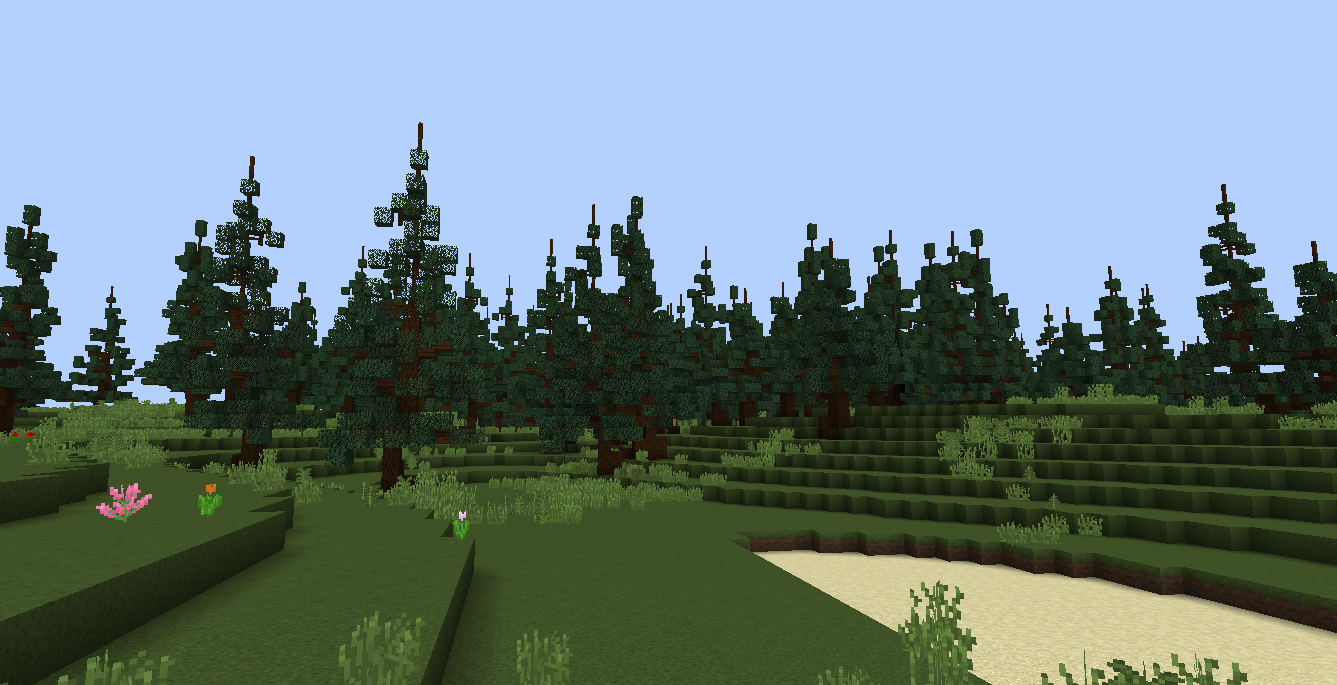 1337×685
Rohan Terrain | In Progress
[Designer: @Enoshade ]
“I’ve gotten all the schematics downloaded from Builder’s Refuge and have set up several layers in worldpainter to apply them. Slowly adding grass/vegetation and rocks, and trees should come soon after. I’ve also made a few new materials in Worldpainter and continued sculpting out certain areas, so Aldburg at least should be almost ready."
- Designer, @Enoshade

Other Developments
We have much resource-pack news to share today. One of the main texturers for our resourcepack, @Tobberz, revealed the following:

"We are working on some decently major resource pack changes. The RP will now be split into Gondor & Rohan branches with largely separate development streams, but with some changes occurring universally across both packs. This is so that we have greater control over the aesthetics of builds in quite different settings and styles (i.e: Gondor versus Rohan). Further to this, we will be moving away from the premise that builds must look good in vanilla, allowing us far greater flexibility over texture choices.

Expect quite major changes in the coming weeks, especially with reference to the Gondor Resource Pack. If you wish to play a role in RP development - whether it be texture design or just feedback - contact me (Tobberz) over Discord and I’ll add you to the texture development chat.

The end goal of all this is to have two completely custom resource packs, with a united artistic vision and style within each pack. But that, I’m afraid, is a little way off yet."

1882×233
Technical Corner
Forum formatting is finally fixed!
This means that every formatting code should work as well as it did a couple of weeks ago. NO MORE VISUAL PAIN!

In other important news, an old change we feel it is important to remind you of is the biggest change this year: we split our server into two; a 1.15.2 server, which includes public plots & Minas Tirith’s world, and a 1.13.2 server (joinable with any version above 1.13.2) which holds all of the other official team projects.
The IP to the server is the same, build.epicquestz.com, but to navigate through the servers, simply do /server plots (to join the 1.15.2 server) or /server build to join the 1.13.2 server. If even after these clarifications you’re still having trouble traveling through our server, feel free to ask us on Discord or in-game for help!

1882×233
Promotions
There have been no promotions for the past two weeks, but we’re looking forward to seeing some within the next couple of weeks!

1882×233
Featured Creation
This fortnight, I’d like to feature Enoshade’s little Barrow Downs plot! He was building it during the Barrow Downs Build-Off that he recently hosted, but only finished it this week! You can visit it at /warp EQ_2:BaDo, on the 1.13.2 server. 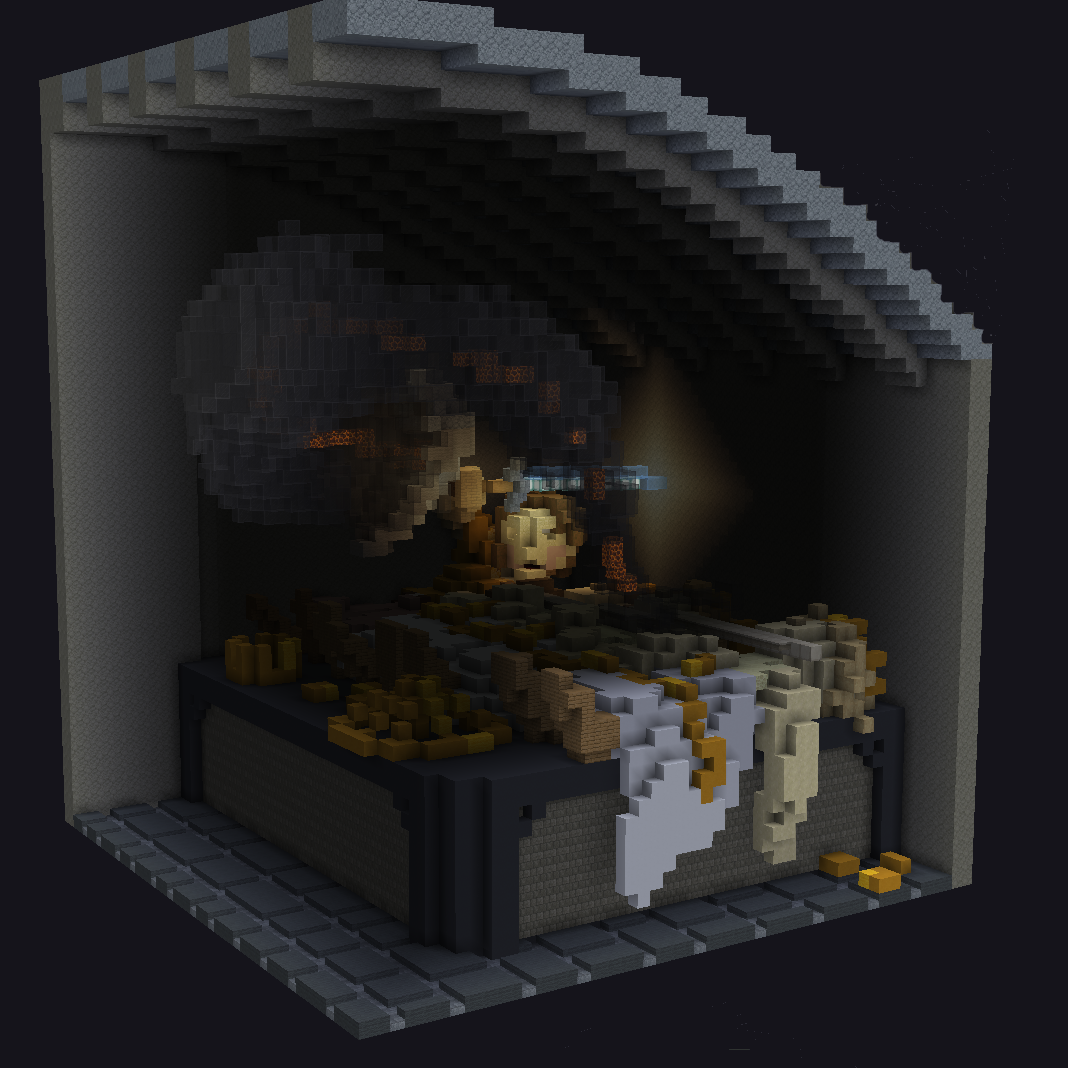 Closing
This time, I’ll ask yet another time a question about EpicQuestz, rather than on the LOTR universe. Read it below.
BI-WEEKLY QUIZ: {QUIZ QUESTIONS}. What was our active project just before Edhellond became an official team project? COMMENT DOWN BELOW! Answer is revealed in the next newsletter!

Answer to the previous quiz:

The First Battle of Beleriand was fought before the Noldor arrived, and was fought by the Sindar, Laiquendi, and Dwarves of the Blue Mountains
The Second Battle was the Dagor-nuin-Giliath, or Battle-under-Stars, fought by the Noldor following Fëanor and his Seven Sons|
The Third Battle was the Dagor Aglareb, or Glorious Battle, which led to the Siege of Angband
The Fourth Battle was the disastrous Dagor Bragollach, or Battle of Sudden Flame, in which Ard-galen burned and many Noldor, including King Fingolfin, were slain
The Fifth Battle was the Nirnaeth Arnoediad or Battle of Unnumbered Tears, in which the Union of Maedhros was utterly broken by Morgoth
and a sixth one,
the War of Wrath, which defeated Morgoth, ended the First Age of Arda and destroyed most of Beleriand

Lastly, I would like to use this opportunity to say something.
I am really thankful to everyone who has made my journey through EpicQuestz a great adventure. I’ve had the best years on the internet in this team, and it surely did influence my life. It left a great mark in my heart, really. It is something that meant a lot to me, and still does. But I may stay no more. Don’t adventures have an end? I suppose not. Someone else always has to carry on the story. Luckily, EpicQuestz is in the situation where there are people to carry it on. I wish to all of you the best of luck, and a prosperous future in EpicQuestz! Remember that the burned hand teaches best, after that advice about fire goes to the heart. You might have ups and downs not just in EpicQuestz, but in real life, but it really is the part of the fun, therefore deeds will not be less valiant because they are unpraised, so your merit will be recognized in the end, be it during your life or after your death.
As Bilbo once said, goodbye.

Apart from the slightly odd image texturing due to the RP updates, awesome newsletter, good job. We’ll be sure to distribute the latest changes soon

Well considering that I wasn’t on EQ when Edh was being built, I have absolutely no clue. Isengard maybe? (purely a guess)

Sorry to see you go Lime, I can think of so many fond memories that you played a part in- The largeplots group build etc.
As Bilbo/Gandalf said, “The road goes ever on and on”

Well considering that I wasn’t on EQ when Edh was being built, I have absolutely no clue. Isengard maybe? (purely a guess)

I think it was Dale or Erebor perhaps, unsure.

What was our active project just before Edhellond became an official team project?

Hmmmm, let me rack my brains for this. Now, I do believe that the survival games + Isengard era came after Edhellond was completed. There was, I also think, something of a mini project involving Dol Guldur back in the day, though I’m hedging my bets on the main major project before Edhellond being Black Gates.