Projects Ongoing
Tobberz February 29, 2020, 7:25pm #1
Grimslade
A part of the larger Rohan project, Grimslade was the ancestral seat of Grimbold, a Marshal of the Mark.

Grimslade was the ancestral home of Grimbold, a lesser Marshal of the Mark. Nothing is known of the location of this structure other that it stood in the Westfold of Rohan. The word “slade” seems to imply that the house was either in a clearing or on a hillside.

It comes from Grim, which Tolkien describes as “evidently the name of an ancestor”, and slade, “forest glade, dell on the slope of a hillside” widely used in English place-names.

Outline
This is quite late in the project to be starting a project planning/info thread, but we felt it was necessary for clarity’s sake, and it will become the norm henceforward. The thread will be updated with progress and instructions as the project proceeds. 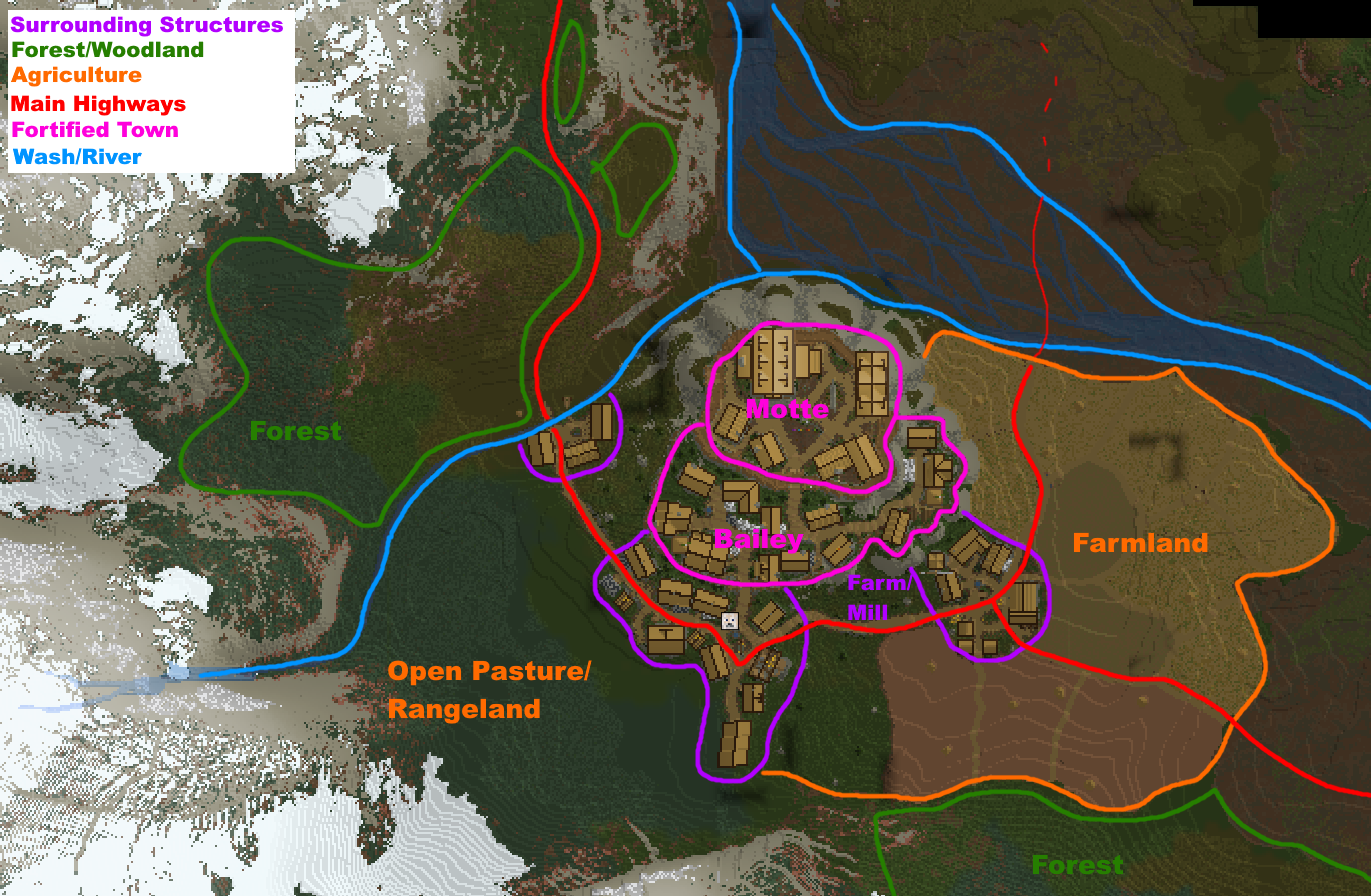 @Traveller Jobs, should you choose to accept them…

At x=4447 z=5630, there should be accommodation for the stablemaster/hand above the stables themselves.

At x=4576 z=5677, this interior needs quite extreme overhauling as it doesn’t quite fit with the rest of the interiors on Grimslade.

The jobs above are complete! This means that the structure jobs on Grimslade are now complete - all that remains is Forest/Woodland & Agriculture. Thank you to all Members who have helped out on this, our 3rd Rohan project.

The Project Designer/Manager, @LimeeFox will now be undertaking his Leadership Review, to check everything is to his liking. This will take a few days.

After that is complete, we will undertake the Final Oversight Review of the completed areas of the project.

I built a couple of exclamation marks with interior improvement tasks over the town. Interior masters are invited to check them and complete the tasks!

The first phase of the quality control by myself and @the_pharaohs_cat on Grimslade is complete.
We’ve gone through all the houses and structures excluding the main hall and checked the exterior and interior.

The vast majority of the houses were fine, and as such we marked them with Green Concrete.

Half a dozen houses need slightly edited interiors, and as such we marked them with Yellow Concrete. They should be fairly self-explanatory, but if you need some instruction talk to me or Cat.

Furthermore, we marked one house with Red Concrete, that effectively needs the interior to be completely redone. Leave this for now, I’ll strip it then announce when it’s ready.

Finally, some structures were marked with Yellow Concrete - meaning we need to make some exterior alterations. Ignore these for now.

Any @Traveller or @Artist is welcome to help out, and feel free to ask in #rohan-general if you need any advice.

We’ve made some more progress, thanks to @Builders for working on the interiors above.

I’ve completed the layout for the fields, and am working with @the_pharaohs_cat on implementing a nice design for the walls/hedges, and paths. 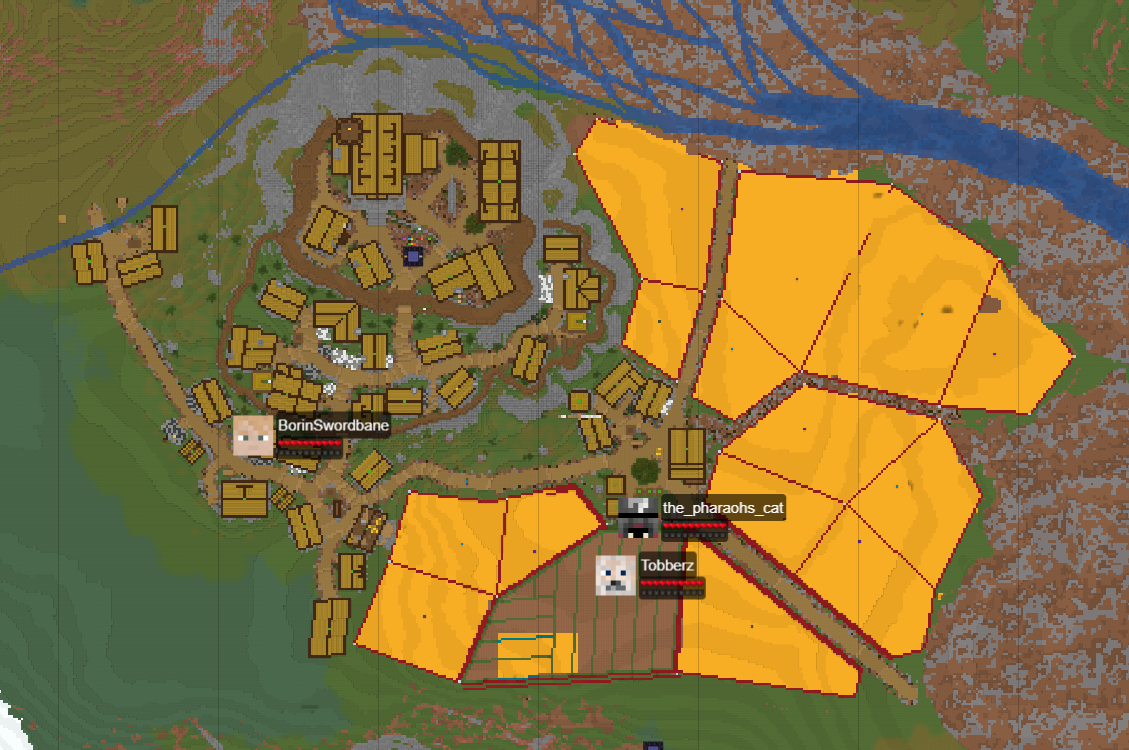 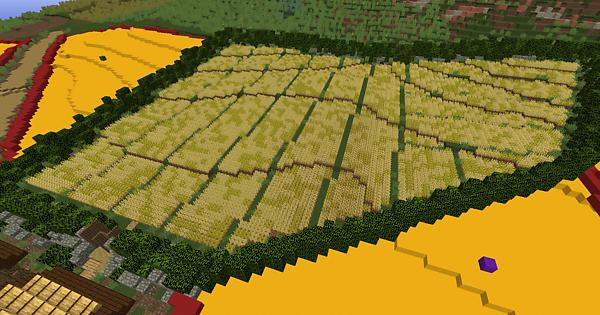 First field complete! Thank you to Cat and myself for bringing our most realistic fields yet to reality!

Further field progress. We may make some alterations to the initial map with reference to the Rangeland, possibly enclosing some of it. Not all the fields will be surrounded by bushes, some will be walled (but less-so as it’s a more expensive way of enclosure). 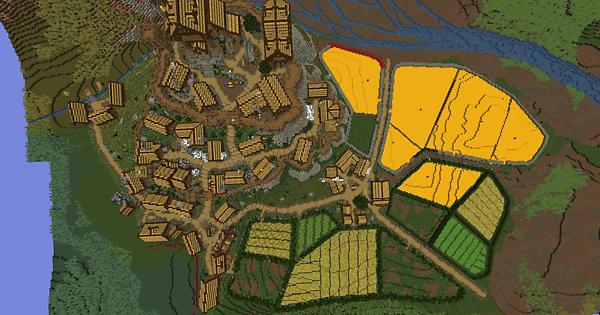 I’ve updated progress, and it’s my pleasure to announce that after the Quality Control review by the Project Overseer & Designer (myself & Cat), the Fortified Town and Surrounding Structures are now complete.

The fields are progressing steadily post a Christmas/New Year break on my part, and the Forest has yet to be begun.

THE FIELDS ARE DONE! This is a momentous moment in history, thank you @the_pharaohs_cat.

This project I’m now counting as Complete, however it will be re-opened once the Rohan terrain is done to integrate it into its new surroundings. We’ll also probably make some tweaks to the surrounding countryside at this time.